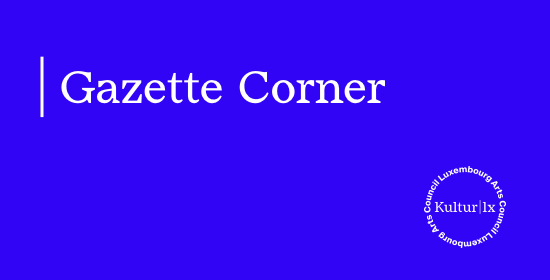 What did the press say about Luxembourg artists in 2021? Quite a lot actually! It was another difficult year for live shows however a number of artists still managed to impress online and over the airwaves with their latest releases. Francis of Delirium’s EP Wading earned the first review in at least 10-years on Pitchfork while C’est Karma saw wide-coverage on ARTE and Cleveland on Resident Advisor among several others.

FRANCIS OF DELIRIUM :
“The band Francis of Delirium has a potential that is rarely–if ever–seen on the Luxembourg music scene. ” – Delano

“Feels like the blueprint for something grand.” – Pitchfork, 7.4 EP Review

“There’s a bit of Pixies and Snail Mail and the Beths in there, and maybe some Lomelda and Lucy Dacus and Built To Spill. You know, that really f*cking good shit.” – Stereogum

C’EST KARMA :
“Luxembourg’s indie music has found an ambassador of choice in the person of C’est Karma. Pop, folk or electro, the musician draws from a multitude of influences to build dense, soft and yet powerful tracks.” – ARTE https://www.arte.tv/fr/videos/106200-006-A/c-est-karma-au-arte-concert-festival/

“…what topics she will surprise us with in her next publications.” – DIFFUS

ROME :
“In any case, the fact is that ROME comes up with at least one high-quality new release every year. After “The Dublin Session” (2019) and “The Lone Furrow” (also) inspired us sustainably, the stars are good for the new album “Parlez Vous Hate?” – Metal.de

“Inevitably, such prolificacy begs the question: does quantity come at the expense of quality? Judging from the twelve songs of Parlez-vous Hate?, the answer appears to be a resounding “No”.” – The Metal Observer

SCARRED :
“It’s not just the usual territories that are producing admirable amounts of forward-thinking heavy music these days. Lots of remarkable things have been emerging through France’s excellent KLONOSPHERE imprint and Luxembourg’s SCARRED may be the finest among them.” – Blabbermouth

“Scarred‘s self-titled record is a fiery and crushing effort that sets the bar extremely high for metal in 2021.” – Everything Is Noise

CLEVELAND :
“It gurgles, rustles, rattles and rumbles – Andrea Mancini aka Cleveland knows how to produce tracks with such catchy textures that you can almost feel them on your skin.” – GROOVE

“(Golem) is a haunted piece of modern techno where drums skitter like spider legs across broken melodies that’ll leave the hair on your neck standing up. A perfect track, in other words, for your Halloween bash.” – Resident Advisor (RA)

ALEX UHLMANN :
“The former Planet Funk singer has already left his mark on half the continent. With his first solo songs, he now also wants to take off in Germany.” – Rolling Stone (DE)

“In this song by Alex Uhlmann that we have just discovered you have more than a battle of taste, a choice to make between two beautiful cities – even if we know that the most beautiful is Paris – you have a beautiful musical interlude, a successful, rare song that will make you spend a pleasant moment, authentically pop without any doubt the best way to dress your day.” – Iggy Mag

BARTLEBY DELICATE :
“Indie music made in Luxembourg also has its say. The proof is Georges Goerens, who works under the pseudonym Bartleby Delicate, who intends to stand out from the crowd with his endearing universe, which is perfectly expressed on his first EP entitled Deadly Sadly Whatever.” – Les Oreilles Curieuses

“One that makes you want more, because despite all the thoughtfulness and melancholy, it leaves you with a hopeful feeling in a challenging time. If the quality of the EP is maintained on a forthcoming album, we can already look forward to it a little.” – Monkey Press

FRED BARRETO GROUP :
“What a pleasure to listen to Fred Barreto “unfold” his solos, his riffs, his rhythms with obvious ease… This album logically gives pride of place to the guitar, declined in all its forms.” – Prog-Mania

“This passionate Luxembourg-based Blues-Rock quartet combines the timeless energy of Rock and the melancholy vibrations of Blues with a new, distinctive character and vibrant energy, which can be felt and heard especially during their live performances.” – Mazik

LUC SPADA :
“Jared Leto, Ryan Gosling and Donald Glover have shown that acting and music can be successfully combined. Luc Spada from Luxembourg is also building on his second mainstay with his debut single “Madness Is Your Candle”.” – MusikBlog

“Luc Spada, besides his work as an actor, is an eloquent writer, poet and musician.” – Interview & Livemusik – Luc Spada | radioeins

JACKIE MOONTAN
“After a dramatic and sensual ‘Crystal Roof’, Jackie Moontan manages to put our confined Sundays into perspective with such rare originality.” – Les Oreilles Curieuses

Visual arts Focus for the German-speaking professionals of contemporary art

Taking advantage of the last days of the exhibition Hacking Identity, Dancing Diversity co-produced by Esch2022 – European Capital of Culture for the Möllerei, Kultur | lx organized from May…

Luxembourg will be the guest of honour at the 39th Marché de la Poésie to be held from June 8 to 12, 2022 in Paris (France). After many postponements due…