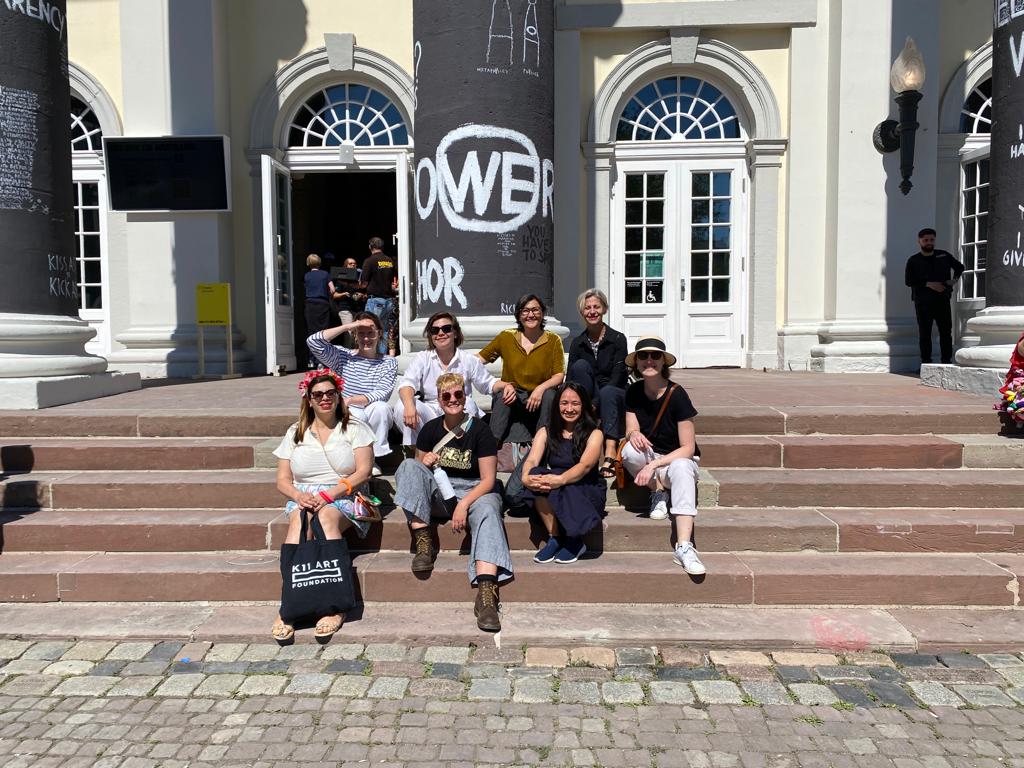 On 16 and 17 June, Kultur | lx hosted for the first time a Visual Arts Repérage in Kassel (DE), during the professional days of the documenta, an event that marks the field of contemporary art every five years with its highly prospective, political and – this year too – polemical dimension. For the 18 artists who took part in this Repérage, it was not only a way to discover a curatorial proposal but also to meet outside the territory and exchange differently.

As part of its missions to support the career development of artists, Kultur | lx issued a call for applications in April for visual artists to participate in the Kassel documenta. No less than 18 artists responded positively to this call and were able to benefit from our support.

The Repérages enable participating artists to discover events that contribute to the history of their subjects and, at the same time, to confront their own practice with those of other artists or curators, who, in the context of the documenta, were largely drawn from the non-Western art scene. This is often an opportunity for them to take a step back from their own research and put it into perspective.

This year’s documenta, with its alternative, activist and heuristic dimension, took the form of an open-air laboratory conducive to (re)questioning. Exploring the links between art and forms of economic and political struggle in the service of social invention, the documenta tackled the question of Western norms (particularly museum norms) that govern (sometimes violently) our relationship with people and works. Curated by Ruangrupa, a collective based in Jakarta, Indonesia, the documenta left its Western comfort zone for the first time, while presenting practices and works that reflect interdisciplinary research and collective experience, which quite rightly could destabilise – in addition to the controversy it generated around the anti-Semitic intent of a series of works.

Prospecting for the benefit of dialogue
This prospective dimension of the event therefore forms a basis for reflection for many artists and can take the form of “continuing education”. It is therefore important for Kultur | lx to support them in this process and to open a discussion on the challenges of the contemporary scene. This is one of the other aims of these Repérages arrangements: by delocalising conversations about artistic practices outside Luxembourg, the participating artists were able to exchange with one another and get to know each other better. This dialogue continued beyond these two days, and it was a great success!

Bringing the scene to life thanks to exchanges, rich conversations between actors in the field of visual arts for the benefit of all, that is also where Kultur | lx wishes to focus on to support the careers of Luxembourg artists.

Successful field trip and launch at the 16th Lyon Biennial

Continuing its series of field trips to major international contemporary art events, Kultur | lx organised a fieldtrip to Lyon from 12 to 14 September, on the occasion of the…