Samuel Hamen, author in residence at the Literarisches Colloquium Berlin 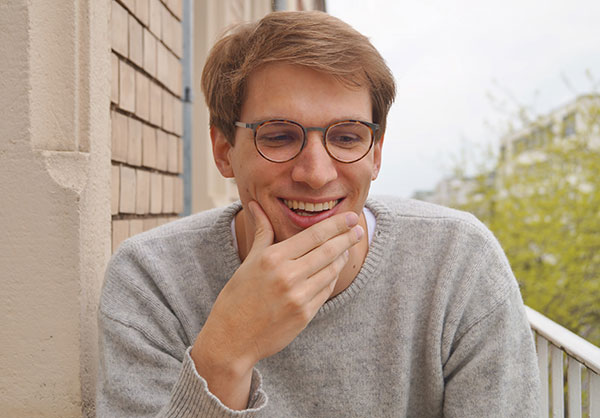 In partnership with the Lëtzebuerger Bicherfrënn – Les Amis du Livre a.s.b.l. and in collaboration with the Centre national de littérature, the Ministry of Culture and the Cultural Service of the Embassy of the Grand Duchy of Luxembourg in Berlin, the FOCUNA is offering an author residency in Berlin on the basis of a call for applications.

By 2020, Samuel Hamen was chosen by the preselection jury, composed of Claude D. Conter (National Literature Centre), Jeanne E. Glesener (University of Luxembourg), Frank Hansen (Lëtzebuerger Bicherfrënn) and Christiane Krier (Lëtzebuerger Bicherfrënn), as well as by the management of the Literarisches Colloquium Berlin, an internationally renowned literary institution on the shores of Lake Wannsee.

Currently finishing his thesis on the poet Thomas Kling in Heidelberg, Samuel Hamen published his first book V wéi vreckt, w wéi Vitess in 2018 and has just won first prize in the 2019 National Literary Competition for the novel I.L.E. In October 2019, his second book, the story collection ‘eeechen, a collaboration with graphic designer Marc Angel, was published.

The residency will give Samuel Hamen the time and freedom to pursue his project of critical rereading, translation and dramatic adaptation Lucilinburhuc. Nationalletzeburgescht Christusepos, an epic that the author Lucien Koenig (1888-1961) wrote between 1934 and 1946, dealing with the idea of a Luxembourg identity.

The last few weeks of summer, National and International Coordinators Diane Tobes & Valérie Quilez were delighted to welcome the new members of Kultur | lx in order to complete…